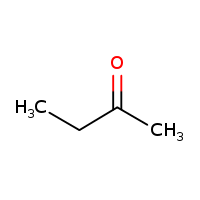 Methyl ethyl ketone is used in processes involving gums, resins, cellulose acetate and nitrocellulose coatings and in vinyl films. It is used in the manufacture of plastics, textiles, in the production of paraffin wax, and in household products such as lacquer, varnishes, paint remover, a denaturing agent for denatured alcohol, glues, and as a cleaning agent. It has similar solvent properties to acetone but boils at a higher temperature and has a significantly slower evaporation rate. Unlike acetone, it forms an azeotrope with water, making it useful for azeotropic distillation of moisture in certain applications. It is also used in dry erase markers as the solvent of the erasable dye.